Justice Scalia on Age Discrimination: Not the foe of civil rights that some may think (Updated 1/28/17) 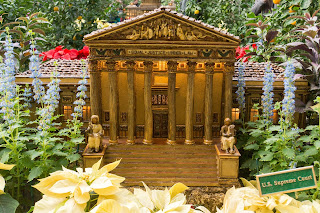 The death of Justice Antonin Scalia and the emerging discussion about a potential replacement have spawned renewed interest in the late Justice's approach to legal interpretation. A common public perception is that Justice Scalia was a foe of civil rights. Yet it behooves us to consider the actual practical effect of applying textualist principles in interpreting civil rights protections. To that end, this post discusses Justice Scalia's voting record in the Supreme Court's recent decisions addressing age discrimination. Because the outcome in each of these decisions turned on a specific statutory provision, they provide an excellent illustration of Justice Scalia's textualist approach to statutory interpretation, over an extended period of time.

Most strikingly, Justice Scalia twice dissented from majority decisions that limited employee protections against age discrimination. In Equal Employment Opportunity Commission v. Kentucky Retirement Systems, 554 U.S. 135 (2008), the EEOC challenged a disability retirement plan that calculated benefits based on the presumption that employees would have retired by age 55 if they had not become disabled. Despite acknowledging the plan's explicit reliance on age in calculating benefits, the majority concluded that the plan did not violate the ADEA, because the evidence did not show that the plan was “‘actually motivated’ by age, not pension status.” Consistent with existing black letter law, however, Justice Kennedy, joined by Justices Scalia, Ginsburg, and Alito, concluded that the employer's facially age-based retirement plan violated the ADEA, absent some exemption or defense.

In General Dynamics Land Systems v. Cline, 540 U.S. 581 (2004), the Court rejected an EEOC regulation that interpreted the ADEA as encompassing a prohibition against intra-class "reverse discrimination." Under the ADEA, an individual is only protected if he or she is at least 40 years old. Pursuant to the EEOC regulation at issue, however, the ADEA was construed as protecting an individual 40 or over not only against discrimination for being too old but also against reverse discrimination for being too young. The majority rejected EEOC's regulation as "clearly wrong," holding that the ADEA only prohibits discrimination based on "old age." In dissent, Justice Scalia explained that he would have deferred to the EEOC's "entirely reasonable interpretation of the text." Curiously, the only two other Justices to dissent were Thomas and Kennedy, and thus, every member of the Court's liberal wing rejected the EEOC's broad interpretation of the ADEA.

As in Cline, Justice Scalia deferred to the EEOC's views in Smith v. City of Jackson, 544 U.S. 228 (2005), and Meacham v. Knolls Atomic Power Laboratory, 554 U.S. 84 (2008). In Smith, the Court held that disparate impact claims are cognizable under the ADEA, but that the scope of liability is narrower than under Title VII of the Civil Rights Act, since the ADEA specifically permits a differentiation based on "reasonable factors other than age." Three years later, in Meacham, the Court held that, where an employment practice has a disparate impact on older workers, the employer bears the burden of proof in establishing the RFOA defense. In both Smith and Meacham, Justice Scalia concurred with the majority, but he explained that he would have deferred to the "eminently reasonable" (Smith) and "unquestionably reasonable" (Meacham) interpretations of the EEOC.

In its most recent ADEA decision, Gross v. FBL Financial Services, 557 U.S. 167 (2009), the Court, including Justice Scalia, held that an ADEA plaintiff alleging disparate treatment must establish that age was "the 'but-for' cause of the challenged adverse employment action." Writing for the Court, Justice Thomas explained that the "ordinary meaning of the ADEA's requirement that an employer took adverse action 'because of' age is that age was the 'reason' that the employer decided to act." Thus, under the "plain language of the ADEA," a plaintiff must establish but-for causation. Rejecting this analysis, the dissent noted that, in Price Waterhouse v. Hopkins, 490 U.S. 228 (1989), the Court had interpreted identical language in Title VII as requiring a plaintiff to merely establish that protected status (e.g., sex) was a "motivating factor" for the challenged employment practice.

Compared with the other five ADEA decisions discussed in this post, Gross is perhaps less easily squared with Justice Scalia's textualist principles. It may be significant, however, that Gross adopts the same statutory interpretation of "because of" as Justice Kennedy's Price Waterhouse dissent. Justice Scalia joined that dissent, and then both he and Justice Kennedy subsequently endorsed that statutory interpretation with the rest of the Gross majority. In this regard, Gross would appear to reflect Justice Scalia's interpretation of the "because of" statutory language in both the ADEA and in Title VII before it was amended by the Civil Rights Act of 1991. Insofar as Gross might be viewed as having insufficiently distinguished the ADEA from Title VII, the decision might merely reflect an exception to general principles of stare decisis, which the Court recently explained means "sticking to some wrong decisions [because] it is usually 'more important that the applicable rule of law be settled than that it be settled right.'" Kimble v. Marvel Ent., L.L.C., 135 S. Ct. 2401, 2409 (2015) (quoting Burnet v. Coronado Oil & Gas Co., 285 U.S. 393, 406 (1932) (Brandeis, J., dissenting)). In this regard, Gross may reflect the conclusion that, contrary to the general rule, it was more important in this particular case to be right than to stick with precedent.

Although this review of ADEA decisions is a mere snapshot of Justice Scalia's jurisprudence, it nevertheless reveals that textualism -- at least as applied by Justice Scalia -- results in consistency, coherence, and predictability in statutory interpretation. Justice Scalia's two dissents from majority decisions limiting ADEA rights belie the common perception of the Justice as a politically conservative ideologue. Moreover, because Justice Scalia would have deferred to the view of the EEOC in three of the six cases, his application of textualism reflects judicial restraint.

Of course, this discussion of Justice Scalia's textualism does not establish that his method of statutory interpretation is superior to rival methods. Still, it allows us to weigh the true merits of textualism as it was actually applied by its leading proponent, rather than through a political lens.


Update 1/28/17 - Media sources have widely reported that on February 2nd President Trump will announce his pick to fill the Supreme Court vacancy. Trump has promised that his pick will be in the "mold of Scalia."

This blog reflects the views solely of its author. It is not intended, and should not be regarded, as legal advice on how to analyze any particular set of facts.
Posted by Ernie the EEO Nerd at 3:50 PM