Transgender Bathroom Access: Why LGBT Advocates Would Do Well to Go Back to the Drawing Board (Addendum 2/28/17 discussing G.G. brief) 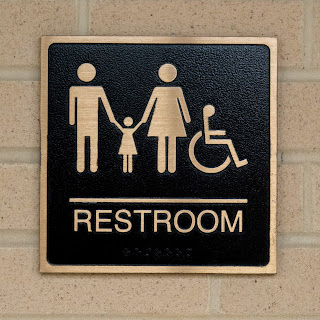 Although LGBT advocates have roundly criticized a recent Trump administration Dear Colleague Letter for backtracking on the issue of transgender bathroom access, the administration was justified in faulting the rescinded guidance for lacking "extensive legal analysis" and for failing to explain how the guidance is "consistent with the express language of Title IX." I don't dispute that those favoring transgender bathroom access have the moral high ground, but sometimes it is not enough for the force to be with you. You also need a sound legal argument.

Unfortunately, rather than being deterred by the rescission of the guidance, the parties appear to be proceeding full steam ahead in Gloucester County School Board v. G.G., in which a transgender boy, Gavin Grimm, is seeking access to the boys' bathroom at his high school. As discussed below, the legal analysis in the rescinded guidance -- a Department of Education opinion letter dated January 7, 2015, and an Obama administration Dear Colleague Letter dated May 13, 2016 -- is deeply flawed. Because the rescinded guidance tracks the analysis adopted by counsel for Grimm and by LGBT advocates, I think advocates would do well to use this opportunity to go back to the drawing board.

The argument for transgender bathroom access rests principally on the Supreme Court's 1989 decision in Price Waterhouse v. Hopkins, holding that Title VII of the Civil Rights Act of 1964 prohibits an employer from treating a worker adversely on the basis of sex stereotypes. Relying on Price Waterhouse, a number of courts, including both federal district courts and federal courts of appeals, have concluded that discrimination against a worker based on transgender status constitutes impermissible sex stereotyping. These Title VII precedents have been extended to the educational context under Title IX of the Education Amendments Act of 1972. Although these decisions do not address the issue of bathroom access, they have been represented -- including in the rescinded guidance and in Grimm's appeal brief to the Fourth Circuit -- as requiring that a transgender individual be granted access to sex-segregated bathrooms based on gender identity. The error in relying on these cases is that they do not address the central question when it comes to transgender bathroom access: How do you determine a transgender individual's sex for purposes of bathroom access? And worse still for LGBT advocates, the cases strongly suggest that an individual's sex turns on sexual anatomy or other physical characteristics.

Another example is the widely praised decision by Judge James Robertson in Schroer v. Billington, 577 F. Supp. 2d 293 (D.D.C. 2008). In concluding that Diane Schroer had been treated differently based on sex stereotypes when she was not hired by the Library of Congress because of her transgender status, Judge Robertson noted that the defendant was liable whether it perceived Schroer to be an "insufficiently masculine man, an insufficiently feminine woman, or an inherently gender nonconforming transsexual." If a transgender woman wants to use a single-sex bathroom designated for women, however, then she must be viewed as an "insufficiently feminine woman," but Judge Robertson did not reach that issue because, as he noted, the outcome was the same as to Schroer's failure-to-hire claim, no matter her particular sex.

Judge Robertson further concluded that the defendant's decision to withdraw its job offer was sex-based, because the decision was motivated by Schroer's "plan[] to change her anatomical sex by undergoing sex reassignment surgery." Because Judge Robertson tied the definition of "sex" to sexual anatomy, his reasoning does not suggest that a transgender individual's sex turns solely on the individual's self-identification as male or female. In the federal sector decision in Lusardi v. Department of Army, the EEOC cautioned against conditioning bathroom access on completion of certain medical procedures. Alas, however, the EEOC begged the question by assuming, with no explanation, that a transgender woman is a woman for purposes of access to a females-only bathroom.

Despite suggestions to the contrary, courts relying on Price Waterhouse to protect transgender individuals have not interpreted "sex" to include gender identity. Rather, those courts have merely concluded that transgender individuals, like non-transgender individuals, are protected against sex discrimination, including sex stereotyping. In Price Waterhouse, Justice William Brennan wrote: "An employer who objects to aggressiveness in women but whose positions require this trait places women in an intolerable and impermissible catch 22: out of a job if they behave aggressively and out of a job if they do not." Nine years later in Oncale v. Sundowner Services, Inc., the Supreme Court reaffirmed in a unanimous decision that the "critical issue . . . is whether members of one sex are exposed to disadvantageous terms or conditions of employment to which members of the other sex are not exposed." In Price Waterhouse, Ann Hopkins had a claim of sex discrimination claim because she was penalized for being aggressive whereas an aggressive man would have been rewarded. Likewise, in Smith v. City of Salem, Jimmie Smith had a claim of sex discrimination when he (the pronoun used by the court) was penalized because he was perceived as acting in an effeminate manner. The court held merely that Smith had the same right as anyone else not to be subjected to sex stereotyping.

Because Price Waterhouse did not expand the definition of "sex," it offers little to support the view that bathroom access must be based on gender identity. Thus, the Tenth Circuit held in Etsitty v. Utah Transit Authority that "[h]owever far Price Waterhouse reaches, this court cannot conclude it requires employers to allow biological males to use women's restrooms." As one of my law professors liked to say, "If the queen had balls, she'd be the king."

It may be surprising then that way back in 1984, Federal District Court Judge John Grady concluded in Ulane v. Eastern Airlines, Inc. that "sex" includes gender identity:


I find by the greater weight of the evidence that sex is not a cut-and-dried matter of chromosomes, and that while there may be some argument about the matter in the medical community, the evidence in this record satisfies me that the term, "sex," as used in any scientific sense and as used in the statute can be and should be reasonably interpreted to include among its denotations the question of sexual identity and that, therefore, transsexuals are protected by Title VII.

Judge Grady's decision was reversed by the Seventh Circuit, but in an early decision in the Schroer case in 2006, Judge Robertson praised Judge Grady's analysis:

That approach strikes me as a straightforward way to deal with the factual complexities that underlie human sexual identity. These complexities stem from real variations in how the different components of biological sexuality -- chromosomal, gonadal, hormonal, and neurological -- interact with each other, and in turn, with social, psychological, and legal conceptions of gender.

Robertson ultimately found it unnecessary to determine whether "sex" includes gender identity, but the issue seems unavoidable if Title VII and Title IX are to be held to establish a right to bathroom access based on gender identity.

Indeed, in Gloucester County School Board, the Fourth Circuit recognized the need to tackle the definition of "sex" head-on. In an opinion letter dated January 7, 2015, the Department of Education had interpreted its own regulation pertaining to bathrooms and other single-sex facilities as generally requiring schools to "treat transgender students consistent with their gender identity." In deferring to the Department, the Fourth Circuit pointed to expansive definitions of "sex" that recognize that the "hard-and-fast binary division on the basis of reproductive organs -- although useful in most cases -- [is] not universally descriptive." Given the regulation's silence as to the treatment of transgender individuals, the court concluded that the Department's interpretation was "permitted by the varying physical, psychological, and social aspects -- or, in the words of an older dictionary, 'the morphological, physiological, and behavioral peculiarities' -- included in the term 'sex.'" Notably, while Judge Andre Davis's concurrence cited Price Waterhouse and its progeny, the analysis in the majority decision by Judge Henry Floyd was limited to the definition of "sex."

You might be tempted to conclude that the Fourth Circuit's decision signals courts' readiness to adopt an expanded definition of "sex," but not so fast. The court acknowledged that a subsequent administration would be free to adopt a different policy, as the Trump administration has done. Moreover, the court stated that the Department of Education's position was "perhaps not the intuitive one." This is a far cry from interpreting the underlying statutory language as mandating transgender bathroom access based on gender identity.

Although most disputes involving sex-segregated facilities have involved bathrooms, I think too little attention has been paid to locker rooms, showers, and other sex-segregated facilities in which individuals are likely to be seen naked. Grimm's opposition to the school board's writ for certiorari stressed that his case is solely about bathrooms as he has not sought access to locker rooms. But if bathroom access should turn solely on gender identity, it's not at all clear why locker room access should not also turn solely on gender identity. Surely, there must be some overarching rule that governs both access to bathrooms and access to locker rooms, and the Justices will want to know what that rule is.

As recognized by Judge Robertson in the Schroer case, the question of whether the term "sex" should be given an expansive definition that includes gender identity is a complicated legal issue that may turn largely on the opinions of experts. Because this issue is not addressed by the Price Waterhouse line of precedent that has served as the backbone of most discrimination cases involving transgender individuals, it has been mostly overlooked by litigants and courts. To say that it is premature for the Supreme Court to tackle the issue of transgender bathroom access is an enormous understatement.


Addendum (2/28/17): Oops, I overlooked the fact that Grimm filed his brief in the Supreme Court last Thursday. The brief makes the same arguments -- and therefore the same mistakes -- that have been made previously. Once again, the brief cites the Price Waterhouse line of precedent for the proposition that discrimination against a transgender individual constitutes sex discrimination and then leaps to the conclusion that a transgender boy must be allowed to use the boys' bathroom. If Grimm weren't allowed to use any bathroom, then it wouldn't matter what sex he is, and the Price Waterhouse cases, like Smith v. City of Salem and Schroer, would be relevant. But that's not what we have here. The brief assumes without providing any explanation whatsoever that a transgender boy is a boy for purposes of bathroom access. And having made that baseless assumption, concludes that treating a transgender boy differently from other boys is therefore discrimination based on transgender status.

This blog reflects the views solely of its author. It is not intended, and should not be regarded, as legal advice on how to analyze any particular set of facts.
Posted by Ernie the EEO Nerd at 8:29 PM