Evans v. Georgia Regional Hospital: The stereotype that gay men have sex with other men "disregard[s] the diversity of experiences of gay [men]" -- WTF?! 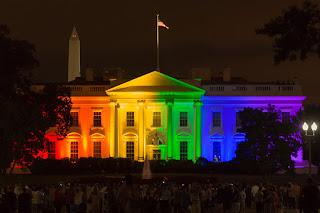 In Evans v. Georgia Regional Hospital, No. 15-15234 (Mar. 10, 2017), a three-judge panel of the U.S. Court of Appeals for the Eleventh Circuit voted 2 to 1, holding that Title VII of the Civil Rights Act of 1964 does not prohibit discrimination based on sexual orientation. The decision is not particularly surprising, given that this is what courts have been holding for over 50 years. What is particularly notable, however, is the peculiarly reasoned concurrence of Judge William Pryor.

And where does Pryor get such ideas? First, he cites controversial articles advocating the view that being gay is a choice, and then he cites an amicus brief filed in the Supreme Court same-sex marriage case, Obergefell, by "same-sex attracted men and their wives," which argued against the recognition of same-sex marriage. Yes, there was actually such a brief.

So in Pryor's view, discriminating against a woman because she has sex with another woman is not sexual orientation discrimination because heterosexual women also have sex with other women. In the same vein, I'm sure he thinks that prohibitions against same-sex marriage do not discriminate against gay men and lesbians because they apply to everyone. Otherwise, we would be stereotyping gay men and lesbians by assuming that they would prefer to marry individuals of the same sex.

Although Pryor's reasoning strikes me as wacky, the EEOC is guilty of the same crime. In the 2011 federal sector decision in Veretto v. Donahoe, the EEOC stated that "Title VII's prohibition of discrimination does not include sexual preference or orientation as a basis." Nonetheless, the EEOC found that the complainant had alleged sex stereotyping, which is covered by Title VII:


[The complainant] alleges that he was subjected to a hostile work environment because CW1 learned that he was marrying a man. He has essentially argued that CW1 was motivated by the sexual stereotype that marrying a woman is an essential part of being a man . . . .

Thus, like Pryor's concurrence in Evans, the EEOC took the position in Veretto that discrimination against someone for acting in a stereotypically gay manner is distinct from discrimination based on sexual orientation, which is not covered by Title VII. The EEOC's heart may have been in the right place, but a what-the-fuck argument is still a what-the-fuck argument, notwithstanding good intentions.

In 2015, the EEOC abandoned the reasoning in Veretto, concluding in Baldwin v. Foxx that sexual orientation discrimination is sex discrimination covered by Title VII "because it is necessarily based on gender stereotypes."

It will be interesting to see whether the EEOC files an amicus brief supporting a rehearing by the full Eleventh Circuit, criticizing Judge Pryor for the very reasoning that the EEOC relied on in Veretto. That would essentially be the pot calling the kettle black.

As a final point, I'll note that Pryor was rumored to be the first choice to fill the Supreme Court vacancy left by Scalia's death. So for those who are troubled by Neil Gorsuch, be thankful Trump bypassed Pryor. In the Trump Administration, bad is the new good, and horrible is the new bad. Let's keep things in perspective.