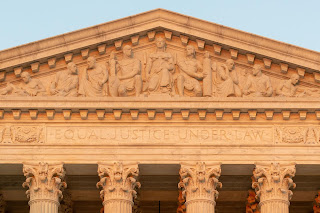 While the Supreme Court's decision in Masterpiece Cakeshop Ltd. v. Colorado Civil Rights Comm'n may have offered little insight into how the Court will eventually balance religious freedom and LGBT rights in a future case, the concurrence of Justice Neil Gorsuch may portend the obstacles that plaintiffs could face in prevailing on another important LGBT rights issue -- transgender bathroom access.

For a brief time in early 2017, before Gorsuch was sworn in, the Court was slated to take up that issue in a case brought by high school student Gavin Grimm, a transgender male, but the Court ended up sending Grimm's case back to the lower courts without addressing the merits. A little more than a year later, on May 22, 2018, Federal District Court Judge Arenda L. Wright Allen refused to dismiss Grimm's claim that the Gloucester County School Board's policy of assigning bathroom access based on "biological gender" constituted unlawful sex discrimination under Title IX of the Education Amendments Act of 1972. Before too long, the Supreme Court is likely to once again be facing the thorny issue of transgender bathroom access. Unfortunately for transgender individuals, if Justice Gorsuch's concurrence in Masterpiece Cakeshop is any guide, they will face a daunting challenge.

As explained by Gorsuch, the record showed that Jack Phillips would not sell a cake celebrating a same-sex wedding to anyone, regardless of the individual's sexual orientation. Although he may have been aware that his refusal had the effect of leaving gay men and lesbians underserved, there was no evidence that he refused to serve them because of their sexual orientation. Rather, it was because of his religious objection to same-sex marriage.

A biological-gender bathroom policy also has the effect of allowing gay and lesbian students to share facilities with individuals of the biological gender to whom they are sexually attracted and the effect of requiring heterosexual students to share facilities with other students who are sexually attracted to members of their biological gender. Does this mean that the policy discriminates against heterosexual students, either by not allowing them to share facilities with individuals to whom they are sexually attracted or by violating their right to bodily privacy? If assigning bathroom access based on biological gender discriminates because of transgender status, then it would seem to discriminate no less because of heterosexual status.

As Justice Gorsuch observed: "The law . . . sometimes distinguishes between intended and foreseeable effects. Other times, of course, the law proceeds differently, either conflating intent and knowledge or presuming intent as a matter of law from a showing of knowledge." Although prohibitions against sex discrimination, including Title IX and Title VII, typically fall into the former category, this fact has been largely overlooked in challenges to bathroom policies.

To be sure, an actor's awareness that his action will disproportionately harm members of a protected group, such as transgender individuals, may be evidence that the actor intended to discriminate against members of that protected group. On the other hand, if there is evidence of a nondiscriminatory motive, as there generally will be with respect to a bathroom policy, then the mere fact that an entity took an action in spite of its effects on a protected group will not be enough to show that the entity acted because of the effects on a protected group. The failure to recognize this crucial difference is reflected in the legal reasoning in Judge Wright Allen's decision where she assumes that the Gloucester County School Board's policy necessarily discriminates on the basis of gender identity merely because of its effect on transgender individuals.

Equitable arguments may very well favor segregating facilities by gender identity, but it does not follow that a contrary policy violates prohibitions against sex discrimination. If claims challenging bathroom policies are to succeed where it ultimately matters -- before the Supreme Court -- then LGBT advocates would do well to heed Justice Gorsuch's concurrence and grapple with the crucial distinction between intended and foreseeable effects.